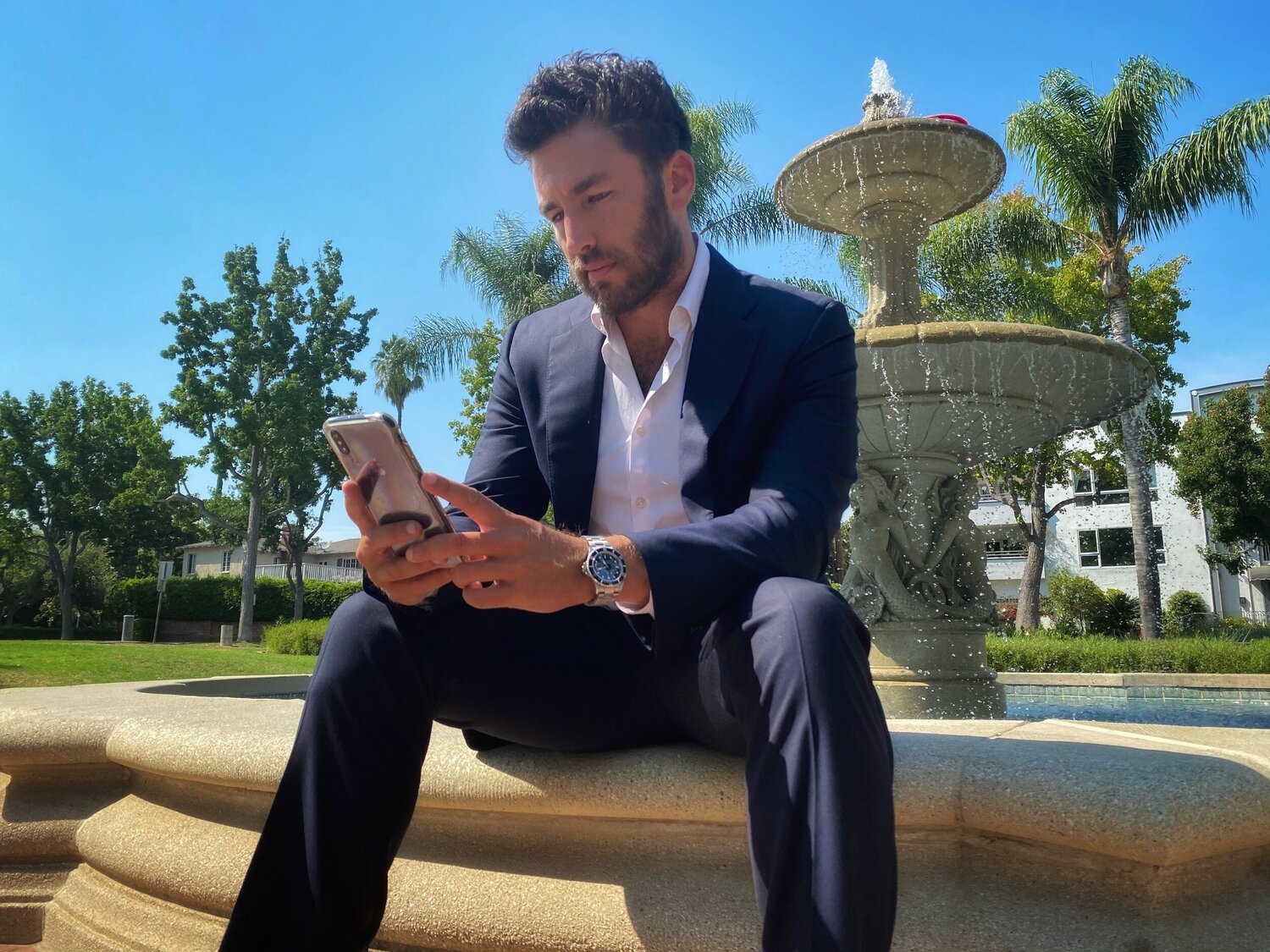 Los Angeles native and tech/media lawyer Matt Bilinsky has always had his own personal take on the news. But since the spread of COVID-19, Bilinsky has sharpened his sword, synthesizing news stories from various media outlets, deciphering the BS, then delivering the truth to a large following on social media.

While Bilinsky is certainly not the only person breaking down COVID news on social media, he does appear to have a uniquely diverse following—ranging from authors, thought-leaders, studio heads, influencers, actors, prominent CEOs of major corporations, and even meme creators who rely on him for truth and perspective in a media landscape that induces suspicion and divisiveness.

Bilinsky’s Instagram has become somewhat of a daily news digest – with a particular focus on debunking phony stories, misleading headlines, and clickbait. On top of that Bilinsky has added to his repertoire frequent Instagram Live interviews with relevant specialists, experts, political, and cultural figures (even some controversial ones) who weigh in on big stories. In the past few months, he’s spoken with NBA star Metta World Peace, real estate mogul Jay Luchs, hospitality kingpin Mark Birnbaum, and online provacateur and journalist Mike Cernovich, just to name a few.

At the core of Bilinsky’s approach, is the idea that the traditional news is not doing its job. “You can no longer rely on legacy news sources for the truth. They are not motivated by truth, they are motivated by agenda and a drive for clicks.”

Before COVID-19 most people were able to ignore this. But when the pandemic hit, and trust in information became a life or death matter, people no longer could.

So, what exactly is wrong with the news?

Bilinsky, who attended Cornell for undergraduate studies and UCLA Law School, says the biggest problem is fake news in the form of subtle language manipulation.

“Everyone thinks fake news is about outright lies—that’s not it,” he says. “There’s a digital architecture in place to generate and spread false and manipulated information, and it is done through very subtle, small linguistic tactics and perspectives.”  It’s only done for clicks, to sway opinions, and to support the views of people who work at those news organizations, he contends.

And he suggests you turn to local news if you want a less biased delivery. “Local news is far more trustworthy than national. There’s limited supply. They don’t have to fill up 24 hours, but cable news does.”

He’s not wrong. It’s no secret that news outlets across the board—from TMZ to The New York Times—are incentivized to write articles with headlines that trigger people because they produce lucrative online behaviors like repeat pageviews and social sharing, which the outlets capitalize on.

“THE SAME PUBLICATION WILL DO VERY GOOD WORK, AND IN THE SAME BREATH WILL PRODUCE PITIFUL, SOPHOMORIC WORK. AND YOU SEE THAT WITH THE NEW YORK TIMES.”

According to Bilinsky, you have to look at multiple articles about the same subject to determine what the truth is.

“You have to be an internet detective,” he says. “I get most of my info via my Twitter feed which is a diverse assortment of business personalities, cultural and social commentators, independent political voices—no corporate or cable news people—and sports journalists. I’m ingesting all my sources and then processing it for people.”

And that’s why Bilinsky has become a news source to many in Los Angeles who prefer not to bombard their social feeds with multiple post about the same topic, and would rather just rely on him to sort through the BS for them. And while he is respected by many, he tends to enrage those who believe him to be offensive, crass, and too blunt.

At the same time, this is also why so many in the public sphere message him privately about beliefs they hold but don’t feel comfortable sharing publicly in fear of being shamed.

Bilinsky welcomes opinions that differ from his own, and happily engages in debate, but when a line is crossed, and comments appear to be rude or obnoxious, people are “going to get an overwhelming response.”

This attitude of his has garnered extreme reactions from people who find his public responses to be unacceptable— and particularly from people who want to ‘cancel’ him, but have not succeeded in doing so.

And these quick-witted responses and jabs towards trolls are also what draw in more and more people to his page. He’s aware of this, and he maintains that the hate he receives stems from limitations people have in the expression of their own opinions.

These onlookers come to his Instagram or Twitter feed, see that he is uninhibited and unfiltered in his delivery, and they are deeply bothered, he says, because “they want to say it, and can’t.”

As expressive as Bilinsky is, it is still difficult to tell where he stands politically. “The best compliment I ever get is when someone tells me they can’t tell which ‘side’ I’m on politically. That means I’m doing it right.”

And perhaps that’s why people from both ends of the spectrum follow him, hoping he will say something or post something in favor of their political views. But most of his followers are truly just hoping for an honest spin on current events.

Where does he stand on the political spectrum?
“I’m mostly politically homeless. I don’t feel at all connected to the Republican Party and I have no love for the Progressive activist movement on the Left. I do relate to some of the ‘newer’ Republican voices like Josh Hawley who have deviated from traditional Republican orthodoxy on economics (they’re more willing to use the government to intervene on things like public services and trade policy) and who want to be more responsible with using the military than the George Bush era Republicans were for instance.

I also find the Bernie Sanders movement to have many valid positions. Income inequality is out of hand and unsustainable–as we have seen recently.”

On Donald Trump?
“I think he’s the symptom not the disease. He is correct on a few BIG topics—namely, China, trade policy, and the media. I do not like nor approve of his personal style or the personal characteristics he exhibits. I think he’s a bad communicator and leader, but he does understand power dynamics well and—once again—is right about a few big topics.”

On LGBTQ issues?
“I probably maintain views that many people might find offensive these days, but don’t know what to tell ya. I support marriage equality. I do not support this ridiculous attempt to detach sex from biology and genetics. I know many gay people who actually agree with me on that as well. They’re of course shouted down as bigots because they dare say things like ‘whether or not you are a man or a woman is determined by your genetics and chromosomes, not your mind.’”

On Women’s rights?
“I of course support the notion that women are capable, talented people who should not be limited at all in what they can do or accomplish in life because of their gender. I do believe that recent ‘feminism’ (i.e. “4th Wave Feminism”) has deviated from admirable goals and is creeping into misandry and manipulation. It does not reflect historical notions of ‘feminism’ which were directed at equality and equal rights.”

Books and authors he thinks you should look into?
“Bonfire of the Vanities” is the greatest book ever written in my opinion. These days Ryan Holliday is the best in the business. Not many contemporary fiction writers I’m familiar with. Ross Douthat recently wrote “The Decadent Society” – which is his analysis of America’s current malaise and I think it is brilliant. I read a lot of ancient Greek writings – the Stoics like Marcus Aurelius and Seneca. And some of the more contemporary pop culture writers like Malcolm Gladwell and Chuck Klosterman – they get some hate because of how popular they are – but they’re popular for a reason.

Thoughts on dating in Los Angeles?
Dating in LA is a bit of a rollercoaster. There’s a lot of excitement to be had, but you better be willing to deal with the chaos. Particularly in the age of social media.

Bonus: What’s he looking for in a girl?
Long legs, nice lips, and a deranged sense of humor. And most importantly—warmth. I value warmth a lot.